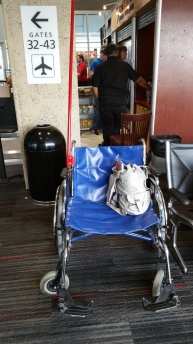 “I have to drop you off here.”  “Can you not pull up to the Blue Cap’s station there?”  “No they don’t allow us to park on that side.”  “Even when you are dropping off an impaired person?”  “Nope, they will ticket us!”  I illicit a huge sigh and step out into two lanes of mid-afternoon airport traffic.  The shuttle driver handily grabs my bag and runs to the Blue Cap station.  “Hey, lady!  Do you need a chair!?”, the Blue Cap yells.   Fortunately, this is Kansas City and I have only stopped traffic 6 cars deep.  I muster all of my available grace and politely respond, “Yes, please, as I climb up on the curb.”  My California Dreaming trip begins.  They wisk me off in a wheelchair that could easily accommodate two of me.  Time to board I am wheeled down the scary boarding ramp and I gingerly take the seat of my choice.  There are some finer points to traveling impaired.  While, arguably, we would all trade the limitations of our impairments to move smoothly, seasoned travelers must operate with the motto, “When all else fails, lower your standards and move on.”  Crossing intersections of traffic always puts me on edge and ineffably I am smacked in the face with the major impact of my disability…I move at a quarter pace of a normal person.  Still vertical, that’s all I care.

I am on my way to Los Angeles, Palm Springs and San Francisco.  In LA I plan to visit the LA County Art Museum where there is an art exhibit that pairs Picasso with his contemporary, friend, and rival, Diego Rivera.  My focus for Palm Springs is to visit a most special friend who has recently moved there from Missouri, preferably before the heat of the desert is in full swing.  San Fransisco holds a visit to the San Fransisco Museum of Modern Art to see Richard Diebenkorn.  One of my all time favorite artists Diebenkorn is paired with one of his life long inspirations, Henri Matisse for this exhibit.  The plan is to connect LA with one of my bucket list train rides, from LA to Oakland on the Starlight.  This train travels so close to the coastline that the ocean laps up on the rails in spots.  The terrain changes radically from exotic primal palm trees, luscious succulents and screaming bougainvillea to vast farms growing artichokes to zinfandel grapes.  Even with this fairly clear itinerary, I really had no idea of the scope of what I would encounter.

My friend, James, picks me up at LAX, just as they are wheeling me down to baggage claim.  With the Beatles song, “With A Little Help From My Friends” playing softly in the back of my mind James and I embark upon a whirlwind tour of LA.  Unbeknown to me James lived in LA before he moved to KC and fortunately for me has a creative project to work on while I am visiting.  We transverse about 8 lanes of traffic to arrive in airport parking, while drivers honk and get annoyed at my slow pace.  Needless to say, here explicatives were interchanged, drivers and inhabitants are much more aggressive.  I am glad to be in the hands of a former Californian while I argue that a cane has little to do with an LA driver not doing us in.

Safely in the car, THE RIDE begins.  We cover LA like an off shore storm rolling in. 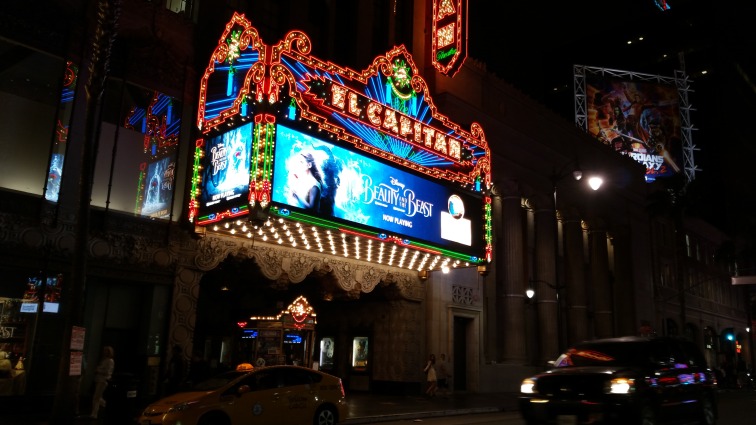 Dinner is on Sunset Boulevard, in West Hollywood, at a tony but reasonable Chinese restaurant named, Chin Chin.  Dining al fresco in LA is divine.

We land in a modest but super smart mid-century modern rehabbed motor hotel on Beverly Boulevard.  Breakfast the next morning is in the cafe next door, aptly called Swingers, James is a swinger, of course, and I am swinging as fast as I can in LA cool.  A nice but scruffy man opens Swingers door for me.  As I pass a lady seated in a booth, she loudly exclaims, “Was that guy bothering you!?  Stay away from him!  He’s crazy, a drunk!  Don’t sit there!  He just sat there!  He may come back in and be crazy again!!”  I respond, “No bother, he just opened the door for me.”  Again, she begins her diatribe and I reassure her, “No worries, I was an elementary school principal.  It’s all good!”  She quiets down as she says, “Yeah, I work in a hospital.”  I find another booth that’s allegedly not his. Shortly he comes in and sits down with her.  Whoa, Dorothy, this is not Kansas despite the cattle on the wall.

Breakfast over, James drops me off at the LA County Museum for more LAmazement.

LACMA is the largest art museum in the western United States.  That said, I managed to view only three of the offerings at this huge museum.

Urban Light is an exhibit that can’t be missed.  Two hundred and two restored antique street lamps are positioned in the museum’s courtyard.  You can drive by and see it 24/7.  The lights stand like soldiers beckoning you to enter.  Lucious golden light at night.

The exhibit, Picasso and Rivera: Conversations Across Time provided an analytic look into the lives of two of the most important artists in the history of modernism in Europe and Latin America.  The exhibition linked ancient artifacts, myths and culture that is evident in Picasso and Rivera’s work.  It was a huge show, difficult to absorb with its size and the number of visitors in attendance.  The LACMA app I downloaded helped but I think my best plan was to purchase and ship home the exhibition catalog.  Certainly, a tome but in my own slow time I can digest what I saw.

Additionally, I viewed, John McLaughlin: Total Abstraction.  These paintings are the polar opposite of Picasso and Rivera.  McLaughlin found inspiration in the Japanese concept of a void.  His strict abstractions have no visual connection to any aspect of our  material world.  Their stringent geometry posit the question of where are we in the natural world?

Exhausted from this amazing adventure with more to process than my head could hold I slowly made my way to wait for James on the curb under LACMA’s  Urban Light exhibit.  To my right, The Peterson Automotive Museum looms with its astounding exhaust fume carapace.  I am weary with the visual and visceral overload here…but there’s no such thing as carbon emission is there? 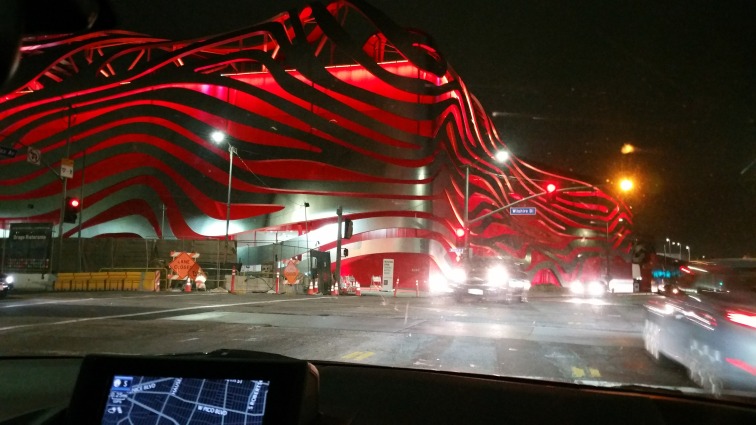 I can get a special Russian Vodka, & wine, lotto and a phone card to help me make sense of all this life.  I love the world you find when you travel!

Stay tuned I’m on my way to Palm Springs in a minute.  Still Moving…